Me, Robin Hood, and My Novel

Why the Glamour of Writing Doesn't Make Rejection Any Easier 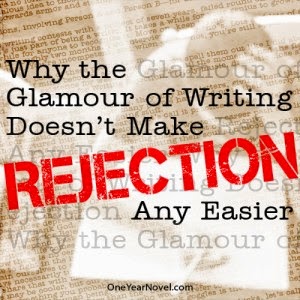 Guest post on the One Year Adventure Novel blog! Here's an excerpt:

I’m here to tell you something you probably haven’t heard before: writers aren’t special.

They aren’t a special class of human being. They are not totally incomprehensible to the rest of humanity. Their dreams and goals are no loftier than the “boring” people interested in math and science.

I know, I know, this is a scandalous idea to those who proudly label themselves “crazy” and generally think a fashion trend towards armor and steampunk goggles is the best idea they’ve ever heard.

Stay with me here.

Read more on the OYAN blog. >>

During my absence on my own blog, I actually wrote two other guest posts for the OYAN blog, condensing and adding to concepts in my old critiquing series. Here are those posts:

How to Respond to Critique When it Hurts

How to Become a Writer's Best Friend

A few days after I penned (keyboarded) the Rejection blog post, I actually got a job! So my life's a bit crazy right now, but I haven't forgotten my attempted reboot. Hopefully I'll have time to hammer out another post soon.

A library is likely to be held in high esteem if I can find books with faded spines and hard textured binding, fuzzy and broken at the edges to display the cardboard underneath. Brown, stained pages and remnants of the true “card catalogue” only add. Need I even mention the smell?

This why I love college and university libraries. They don’t discard these old books to fill their shelves with new, glossy ones--even if these shiny imposters are good books, it never really seems justified to me.

But I have found a public library with books not only marked with due-dates from the 90s, but also this amending stamp on the card holder: “10c per Day Fine Effective Jan 1, 1970.”

And so, by this long way around, we come to The Riddle of the Black Knight and Other Tales and Fables Based on the “Gesta Romanorum” by Thomas B. Leekley. 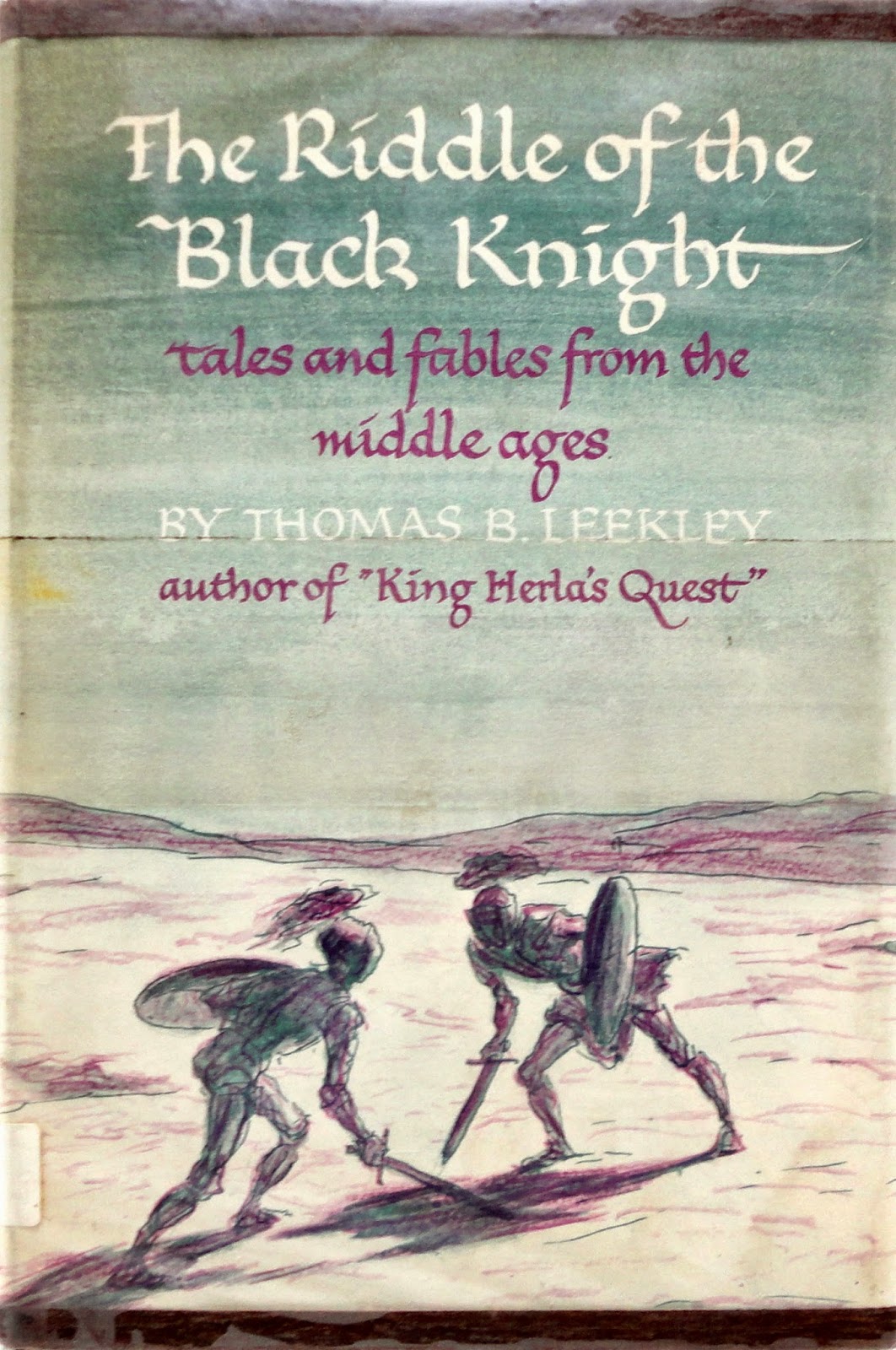 There are many reasons why I picked up this book. The main reason I actually checked it out is this:

“What Sort of Book is This?”

The stories you will find here are all in some way based upon a medieval book called Gesta Romanorum, a title which, translated, means Deeds of the Romans. Someone has pointed out that the stories in it are not about real deeds, nor about real Romans either; but writers have never been very accurate in naming their books, and perhaps it makes very little difference.

What follows lives up to its J398 shelving. It is a collection of “fairy tales” or “morality tales”--only, they’re ones you probably haven’t heard before. I found it to be a thoroughly enjoyable read, wished there were $0.01 copies in the Amazon used section (alas, they hover more around $7), and wished I wouldn’t get weird looks if I asked about reading it aloud to younger siblings.

In the same vein, I recently discovered Gilgamesh by Bernarda Bryson. This book, published in the 1960s, is a retelling of the Epic of Gilgamesh, one of the oldest works of literature we know. Besides the text, which overall reminded me of days when I read D’Aulaires’ Book of Greek Myths, this book also included dozens of illustrations by the author, based on contemporary art. I again wished I could snatch it from the library ($9 on Amazon, sigh) and read it to siblings.

Perhaps I should explain my sudden obsession with enforcing my children’s literature taste on younger siblings via Important Bonding Time. 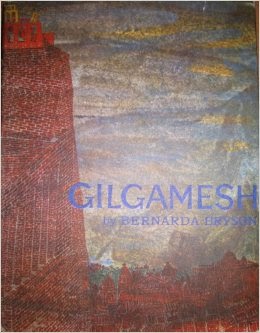 I am very bothered by the way history is taught. The first history textbook I ever saw (okay, in my possession with intent to read) came to my hands in my freshman year of college. What is this foul monster we have avoided for so long?! Does it bite?

When I wrote my 5,000+ word research paper for College Writing II (bear with me, guys), it unwittingly turned into a passionate rant:

Generalizing and compartmentalizing [medieval people] lives makes them inhuman. History becomes a study of facts and figures, and not one of red-blooded humanity. Humans are complex beings, and society is a complex organism. Simplifying and dehumanizing history is creating a straw man of it: a straw man encourages chronological snobbery and ignorance.

History via the textbook in general strips it of the story. And it removes its characters, beyond the ones that we deem “important” enough for brief bios. But who’s to say that Richard the Lionheart’s crusades were more important than those tilling fields back home?

Writing my historical novel and the years of research it spawned has given me such a rich idea of what the past is. Deeply and closely studying 12th century England gives me a greater appreciation for the nuances of 16th century Japan, not because I’m on expert on Japan, but because I’m not. I know if I studied it as closely as I have the 12th century, it would be a fascinating and utterly different tapestry of lives. I respect that.

Children’s books like Riddle of the Black Knight and Gilgamesh give me hope. I see historical fiction as a bridge to the fascinating land of the past, inhabited by our ancestors and the accumulated wisdom (one can hope) of the human race.

One can never start over that bridge too early.

A little over a month ago, my friend Braden asked me to guest post on his blog, The Storymonger. Because of time constraints, he said I could use one of my older blog posts instead of coming up with something entirely new. When I asked which one he’d like, he picked The [Un]Importance of Inspiration.

As I went over that post, I found myself having to update it. It refers to events that specifically relate to August 2012, and the act of simply past-tensing them didn’t sit well with me. I was reminded of my blog, how much I enjoyed it, and how I lost it. I lost a lot of things in 2012 and 2013. Most of them were probably my fault. Some of them definitely weren’t. All of them hurt.

But hey, maybe I could start blogging again. This post would go live on his blog March 31st, and since I included a link to my own blog, it would be great to use this month to get new content up, right?

My blog is out of date. The descriptions of myself and everything else are old. The format feels cluttered. Cluttered with 16, 17, and 18-year-old me. Obviously I have to revamp. I have to reconsider. I have to figure out where to start and where to go. New posts must sparkle with the polish of my “golden years” of blogging, or no one on my still-clinging follower list will want to read them. I need energy. I need purpose.

I felt the need to live up to where my blog used to be. To pick certain days to post, to have posts that stick to certain topics, to hit that 500-and-under word limit, to edit and to refine and to figure out where this blog is going and make it abundantly clear to everyone.

Four posts. Four posts on writing, Robin Hood, God. Or if not that, whatever great new direction I will be taking. Revamped style. Rewritten bio and story explanation. New photos. De-cluttering. That is what people will see when they click from that post to this blog. That’s the March Perfection.

I have a Perfection or Nothing mentality. If I’m not going to be perfect, what the point is trying? If I can’t be perfect, why should I bother?

When the demand is Perfection or Nothing, I crack under my own pressure. The result is Nothing because I can’t even bear to start. I might get it wrong.

This is why I’m writing a post at 1 AM on March 30th. I still put a lot of weight in deadlines. Especially if I tell friends that I intend to write blog posts in March (that would be Braden again--dang it) or mention in author blurbs that I blog, present tense (double dang it).

Funnily enough, the title of this post has been in my head for at least a week, possibly two, now. Even that isn’t enough to get me going, apparently.

But here I am.

R.G. Nairam
I'm a homeschooled student who loves writing and Big Questions. I have obsessions with Robin Hood, Hamlet, 12th century England, and almost everything else British. I'm a daughter of the High King and I try to glorify Him in all I do. I write to preach good tidings to the poor, to heal the brokenhearted, to proclaim liberty to the captives, to proclaim the acceptable year of the LORD, to comfort all who mourn, to give beauty for ashes, to rebuild the old ruins, to rise up the former desolations, and to repair the ruined cities. I write Soli Deo Gloria. 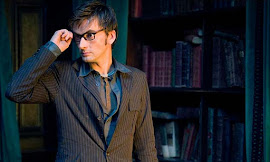 "You want weapons? We're in a library! Books! The best weapons in the world! This room's the greatest arsenal we could have--arm yourselves!" ~The Doctor

"Adventures, I used to call them. I used to think that they were things the wonderful folk of the stories went out and looked for, because they wanted them, because they were exciting and life was a bit dull...But that's not the way of it with the tales that really mattered, or the ones that stay in the mind. Folk seem to have just landed in them...I expect they had a lot of chances, like us, of turning back, only they didn't. And if they had, we shouldn't know, because they'd have been forgotten." ~Sam Gamgee 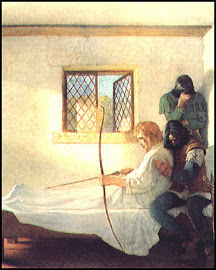 "Robin Hood is dead, and no man can say truly where his grave may be. At the least it but holds his bones. His name lives in our ballads, our history, our hearts--so long as the English tongue is known." ~Paul Creswick 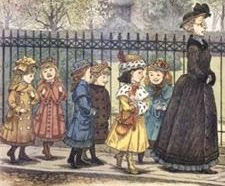 "If you tell stories, you like nothing so much as to tell them to people who want to listen." ~Sara Crewe